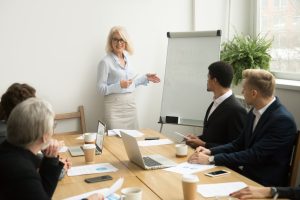 Having watched many organisations as they strive to make changes and deliver significant performance improvement, the most critical requirement I have seen is the ability to manage cross-functionally.  The projects that deliver significant improvement (for example: IT / system projects, new product development projects, organisation / process redesign) all require integrated action across functional boundaries.

However, when faced by the need to do something radical, most organisations will break the problem down along functional lines and each director will tackle the perceived issues in their area.  All too often I have seen this lead to piecemeal improvements and the frustrations that result from a lack of co-ordination and integration.

One particular situation that comes to mind was the transfer of operations from one site to another.  The receiving site structured a clear project plan based on sound principles.  This plan was structured around the functional areas on the receiving site and progress was monitored by the management team.  The lowest level of effective management was the management team and as a consequence all actions were delegated down within the departments to get things done.  Progress was slow, ineffective and the project ran late.

By contrast, I worked on a major project which was looking to restructure the operations directorate of a major manufacturing company by outsourcing and consolidating activities.  Rather than letting each function (purchasing, operations, engineering, finance, facilities, HR) make their own conflicting proposals, we established a full-time, cross-functional team.  This team used product group analysis to analyse each product family, both the current processes and options for the future.  The director and his management team reviewed progress every week and within 6 weeks, the team had an agreed plan and a full business case to present to the Board.

Once the business case was signed off, we actioned the plan using cross-functional teams to work on each product group.  We also established a team to steer the work and ensure that the change management / people issues were co-ordinated successfully.

Had the first project been managed cross-functionally, three principal features would have been used:

Planning for the project as a whole would have identified all deliverables, not just those for each function.  Agreeing to a single project methodology would have recognised that dividing the move into 3 distinct, but complete transfer phases, would have resulted in effective delivery.

A multi-functional project team, involving full-time resources, would have been created to undertake the detailed planning and implementation.  The cross-functional management team could have been used to steer the project team, review progress and sign-off on critical steps (i.e. business case, phase completion).

View all posts by Hartswood Management